Northern corn leaf blight (NCLB), caused by the fungus Exserohilum turcicum, is one of the most frequently occurring foliar diseases of corn in Ohio and the Midwest in general. Since the early 2000s, both the prevalence and severity of this disease have increased, but in most years plants only becomes severely diseased well after silking. During wet weather yield losses may be as high as 30-50% if the disease becomes establishes before tasseling. However, if leaf damage is only moderate or is delayed until 6 weeks after silking, yield losses are minimal. Severe damage caused by NCLB also predisposes plants to stalk rot and lodging, which may further reduce yield and grain quality.

The characteristic symptom of northern corn leaf blight on a susceptible hybrid is one-to-six inch long cigar-shaped gray- to tan-colored lesions on the leaves (Fig. 1). However, before lesions are fully developed, they first appear as small light-green to grayish spots approximately 1-2 weeks after infection. As the disease develops, the lesions spread to all leafy structures, including the husks, and produce dark gray spores, giving lesions as dirty appearance. The lesions may become so numerous that the leaves are eventually destroyed, causing major yield loss due to reduction in the available of carbohydrates to fill the grain. The leaves then become grayish-green and brittle, resembling leaves killed by frost. 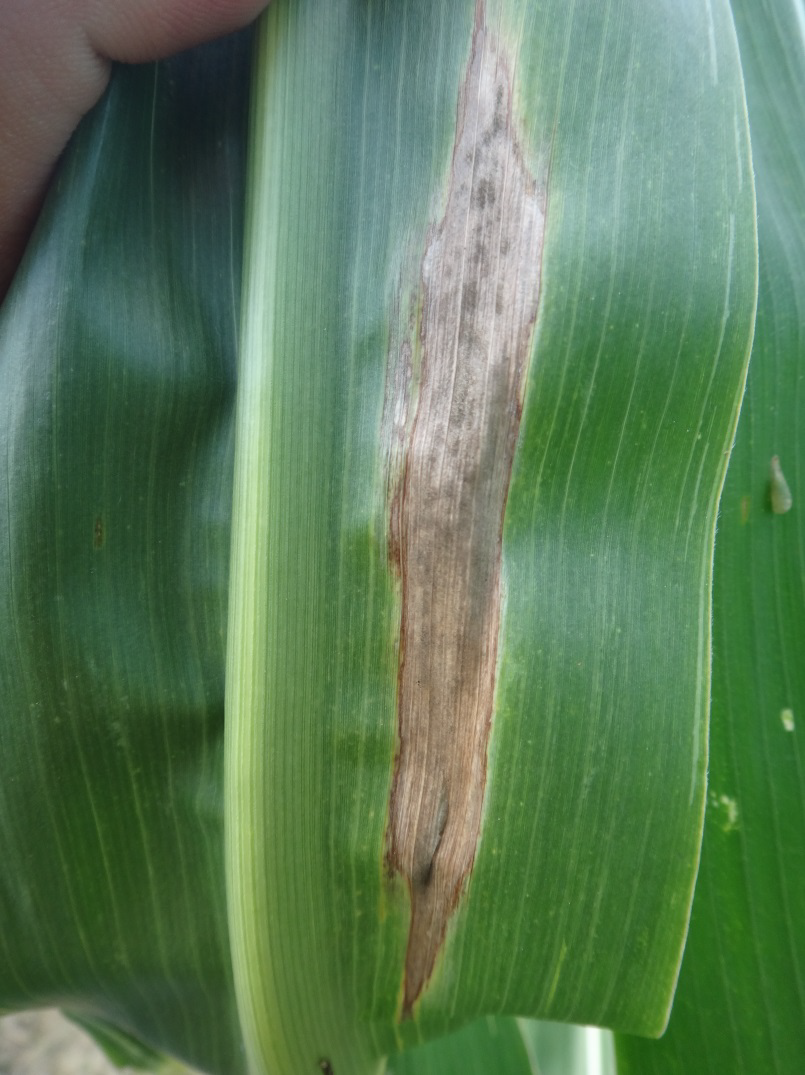 Lesion characteristics may vary among hybrids based on their resistance and interaction with different races of the pathogen. Several physiological races of the fungus are known to occur, including races 0, 1, 2, 12, 23, 23N and 123N. Two types of resistance are available to protect against these races: partial resistance (non-race specific), which is controlled by multiple genes and protects against all known races of the fungus, and race-specific resistant, which is controlled by single Ht genes (Ht1, Ht2, Ht3, and HtN) and, as the name suggests, protects against specific races of the pathogen. Partial resistance and resistance conferred by HtN are expressed as a reduction in the number and size of the lesions, whereas resistance conferred by Ht1, Ht2, and Ht3 is expressed as small chlorotic lesions. A compatible interaction between Ht genes and races of the pathogen results in a susceptible lesion type—large necrotic cigar-shaped lesions (Fig. 1)—whereas incompatible interactions result in small chlorotic lesions (resistant lesion type). For instance, race 1 of the fungus causes large necrotic cigar-shaped lesions on hybrids with Ht1, but small chlorotic lesions on hybrids with Ht2, Ht3, or HtN.

The fungus causing NCLB overwinters as mycelia and conidia on corn residues left on the soil surface. Conidia may also be transformed into thick-walled resting spores called chlamydospores. During warm, moist weather in early summer, new conidia are produced on the old corn residue and carried by the wind or rain to lower leaves of young corn plants. Infection and disease development are favored by heavy dew, frequent rainfall, high humidity, and moderate temperatures. Infection by germinating conidia occurs when free water is present on the leaf surface for 6-18 hours and the temperature is between 66 and 80°F (18-27°C). Under favorable conditions, lesions develop and produced a new crop of spores within 7-12 days on susceptible hybrids, causing the disease to spread rapidly. Secondary spread from lower to upper leaves and among plants within a field results primarily from spores being splashed around by rain, whereas wind is responsible for long-distant spore movement and spread of the disease from one field to another.

corn disease control, northern corn leaf blight, plant pathology
TOP
We collect anonymous information to operate this website and to improve its usability. Kindly note that by using this site you are choosing to the use of cookies. Accept Read Policy
Privacy Policy Tip